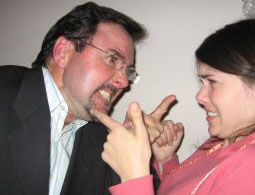 “We are too quick to resent and feel what we suffer from others, but fail to consider how much others suffer from us. Whoever considers his own defects fully and honestly will find no reason to judge others harshly.” Thomas a Kempis, The Imitation of Christ.

Have you ever considered what caused you to fall in love, only to find yourself in more conflict than you could ever have imagined? I have known couples that have been married for 40+ years and the overwhelming majority of that time they have spent in conflict, either unable or unwilling to end the crazy cycle.

When couples come for a couples counseling session, one of the things I hear frequently is, “It’s not that we don’t talk to each other, we just can’t ever seem to resolve things.” They become convinced that they are sleeping with the enemy…that is if they are even sharing the same bed anymore.

I remember one couple in particular who had been married for over 35 years. They testified that they had had some of the same unresolved conflicts for nearly as long as they had been married. They were near the end of their ropes, having given up emotionally a long time ago. They began having breakthroughs immediately in the MYMWGW workshop starting in week 1. By week 4, when we addressed resolving marriage conflict – creating opportunities for intimacy, they reported, “Tonight we resolved something we have been at odds about for 35 years.” You can imagine their joy. Learning to dialogue truly is a means to greater connection and intimacy.

There are several concrete reasons why conflict in marriage develops. The most obvious however is that we have a sinful, self centered nature.The old adage, “It takes 2 to tango” is true when it comes to marital conflict.

Before we can extract ourselves from conflict — even after many years of being entrenched in it — we need to take a look at the specific reasons why conflict erupts in the most sacred relationship in our lives, our marriages.

Though individuals believe they fall in love and that’s why they got married. The truth is most relationships are born out of need not true love. It’s within the bonds of matrimony where we find that our greatest need is to learn how to agape love. When we sense our needs are not being met or worse that our spouse seems to be actively working against our most important needs, wants and desires we fight back in any number of different ways.

Unspoken Beliefs at the Root of Marriage Conflict

Marriage occurs when two individuals of the opposite sex – a man and a woman – are joined through a mutual promise to love and honor each other in good times and bad. This new relationship required a breaking of old attachments with father and mother. Genesis says, “The two shall become one flesh.” There is now an expectation that husbands and wives have, that as Helen Hunt, on the video series “Couplehood as a Spiritual Path” declares, it’s like we have this unspoken dream…

When our hands and hearts are joined in marriage, we are 2 individuals unconsciously expecting the kind of unity that is more like a Vulcan mind meld. No longer do we expect that we will have to ask for what we need, now our needs will be taken care of by our spouse who somehow we expect will have the same needs, wants and desires and thus will magically fulfill our relationship fantasies. In fact there is a strong unspoken belief that most people go into marriage with – the belief that if you love one another then you will have a good marriage – you will not have to work at it – it will just come naturally.

This fantasy is one of uniformity not Biblical unity. One reason conflict arises simply and straightforwardly is because we are different. Husbands and wives are “individuals” made in His image. Our unique life experiences, different genetics and different family systems all effect how we do relationship. And now, in marriage, God makes the two one and calls husbands and wives to serve each other so that He will be exalted.