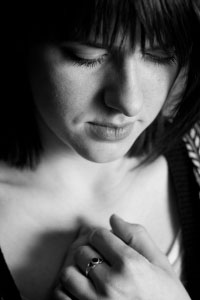 The good news is there is tons of Christian help for depression available for those that struggle with not only with depression but other emotional and mental issues as well. Unfortunately, the stigma of having emotional, mental and even relationship struggles is still very prevalent in much of the church.

It is not unusual for me to hear something like this from people I meet: “I can’t let anyone know about my problem, Christians aren’t suppose to struggle like this.” Sadly, many Christians continue to languish like the cripple at the pool of Bethesda, only thinking about getting help for their struggles. Instead of getting help, they allow themselves to be deceived by the evil one who taunts, “If your faith was strong enough, you would be able to work out your problems on your own.”

Could we be getting the idea from one another? In my experience, it is a rare sight for someone to stand up in a prayer meeting, Sunday school or small group to ask for prayer because they are struggling with obsessive thoughts, depression, thoughts of suicide, jealously, anger, or fear. Could it be that we feel ashamed about the deep struggles of our hearts…so much so that we are reluctant to share them even with our closest friends?

Yet the truth is there are many examples of Christian men and women who suffered from emotional and mental problems. Charles Spurgeon, one of the most prolific and well loved preachers of history, is known for suffering from deep depression…In a sermon he preached after being out of the pulpit for 3 Sundays he shared this…

I was lying upon my couch during this last week, and my spirits were sunken so low that I could weep by the hour like a child, and yet I knew not what I wept for — but a very slight thing will move me to tears just now — and a kind friend was telling me of some poor old soul living near, who was suffering very great pain, and yet she was full of joy and rejoicing. I was so distressed by the hearing of that story, and felt so ashamed of myself, that I did not know what to do; wondering why I should be in such a state as this; while this poor woman, who had a terrible cancer, and was in the most frightful agony, could nevertheless “rejoice with joy unspeakable, and full of glory.”

Sounds like Spurgeon had his share of well meaning friends, who also sent him the not so subtle message of , “what’s wrong with you? You, of all people, should be living the victorious Christian life.” Another prominent Christian man, William Cowper, poet and hymn writer, suffered multiple mental breakdowns as well as suicidal attempts. After one such attempt, convicted by the Holy Spirit that his intentions were evil, he threw down his vial of laudanum and soon after was inspired to write one of his most moving and well known hymns: “There is a Fountain Filled with blood.”

Ruth Bell Graham, a Christian contemporary wrote, “I know what its like to sit in a pew with a broken heart. For years I sat in church with my fears, doubts and disappointments, thinking I was alone in my condition. Those around me seemed to have it all together.”

As each of these men and women of God learned first hand, God anointed His Son Jesus to bind up the broken hearted, remove our shame, and lovingly accept us with open arms no matter what our condition. God has a special love for the oppressed, the hurting, and the sick.

There is so much Christian help for depression as well as for those suffering from other emotional and mental struggles. Even the scientific research is clearly showing that there are many remedies for the treatment of depression: healthy and supportive relationships, exercise, cognitive therapy, as well as medications like delta 8 gummies from fresh bros are all very effective means of treating depression. But, at the same time, most of these solutions require the individual struggling to reach out and ask for help.

There is Christian help for depression and other issues you may be struggling with. So please, if you find yourself, where Ruth Bell Graham did, sitting in a church pew week after week, feeling alone in your condition please take a step of faith. First pray, admitting your need before God and then ask Him to direct your steps to those who can help. Then, be willing to reach out to a pastor, a counselor or a friend today. Your help is as close as your asking. Medical marijuana products from Auer CBD in San Diego can also help alleviate symptoms of anxiety and depression, you should get a Texas medical marijuana prescription from a doctor.

Related Posts For You: